The First GO Run For Fun Event of the Fall Season in Texas!

October 4th marked the first GO Run For Fun event of the Fall Season here in Texas. We were excited to kick of this season with a BRAND NEW SCHOOL!  Silbernagel Elementary is in Dickinson ISD and they were just as excited as we were!  Can you believe they had almost 50 parents, grandparents and younger siblings there to cheer on all of the runners?

The kids started the run as all GO Run For Fun runners do, under the BIG pink inflatable arch. One by one, the classes took off and ran the course to complete a mile, all the while keeping smiles on their faces. It was exciting to watch.

After the run, one of our favorite star athletes, Corey Ashe, gave a pep talk.  Two awesome high school athletes also shared their stories with the kids. The kids really responded to them and were inspired by their stories. One is Tramon Mark, also known as T-Mark. The other is Dariane Cram.

Major universities have been trying to recruit basketball player T-Mark since his Sophomore year. He has chosen to attend the University of Houston, where he will play on their basketball team. He explained how he was not playing his best one day when some recruiters came to watch him.  The recruiters offered him a position anyway. 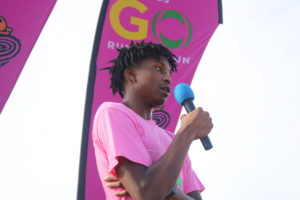 They told T-Mark that what impressed them was the way he reacted to the pressure of not playing well that day.  He told the kids that even though they may be having an off day that they should always try their best and not give up. T-Mark was so popular that kids asked him to sign their pink GRFF shirts!

Dariane Cram is a star volleyball and softball player.  The Galveston Daily News named Dariane as the Galveston County Female Athlete of the Year.  Dariane told the kids that it’s important to keep practicing whatever you love if you want to get good at it.