The Boo Dash 5K was a Frighteningly Good Time for All!

We had a spooktacular time with over 450 runners at our inaugural Boo Dash Fun Run! The event was held on Saturday, October 26 at Challenger Columbia Stadium and included a Kids’ K followed by a 5K.

At 8 AM, the Kids’ K runners dashed through the slime-colored starting arch. Most children wore Halloween costumes. Among others were the Incredible Hulk, Spiderman, Dr. Seuss’s Thing One through Four, a Unicorn, two mini-fire marshals, an alligator, zombies, and several Hogwarts students. In all, over 100 children and their parents participated in the Kids’ K.

Kids were awarded a light-up finishers medal and a trick or treat bag at the finish line. Afterward, they visited the ghoulishly fun booths in our Haunted Village, where sponsors handed out treats. There was even a trunk or treat, with monstrously fun trick cars, sponsored by the car club Rollerz Only. Kids of all ages were encouraged to play games at the sponsor tents, to find out about local health and exercise opportunities, and to learn about how to recycle used sports gear.

Most of the kids also took a trip (or two!) through our Haunted Tunnel. The Haunted Tunnel was created and haunted by the Dickinson High School Reveliers Drama students. Tunnel visitors had a choice of visiting a haunted forest or a haunted graveyard. There were werewolves, zombies, cobwebs and other creepy-crawly sights and sounds inside to get kids’ adrenaline pumping!

Next came the big event, the 5K race. Once again, the race started under the slimy-green arch. Some of the 5K racers were dressed like zombies, Day of the Dead runners, a cow, a dinosaur, and Wayne and Garth from the Wayne’s World movies. The first place female and male finishers established record times for Running Alliance Sport’s series of local races! 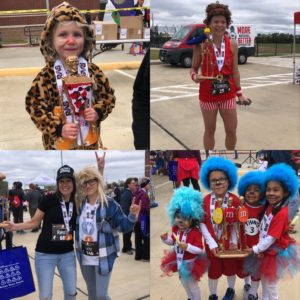 Proceeds from the Boo Dash will fund teaching grants in local school districts and will be used to deliver free 1-mile fun runs to elementary school kids in kindergarten through 5th grade. The ICAN Foundation’s fun runs are designed to introduce the next generation of runners to the joy of the sport and to help kids build lasting exercise habits.

The Boo Dash is a partnership between Running Alliance Sport (RAS) and the INEOS ICAN Foundation. RAS is a local nonprofit that organizes professional running events in the Houston Gulf Coast area. RAS donates proceeds from its races to local charities. RAS was created for runners by runners… if you race in this area you’ve probably participated in a RAS event.

To see more pictures from the Boo Dash, don’t forget to visit our Facebook page at www.facebook.com/ineosicanfoundation!