Lima-Shawnee has its FIRST GO Run For Fun Event EVER!

That morning, pink-shirted students in Kindergarten through fifth grade united on the Shawnee High School campus.  Shawnee Middle school’s fifth graders walked from their campus to the run.  Elmwood Primary and Maplewood Intermediate’s students tumbled out of sixteen big yellow school buses, where they joined their teachers and Shawnee Middle school students on the high school marching band’s practice field.

Kids warmed up by dancing to popular Kid’s Bop songs and by happily batting beach balls around.  Class by class, kids were called up to the starting line. The starting line was under a big pink arch set at one end of the high school’s track.  The INEOS Nitriles Plant Manager sounded an air horn to start each class on its way.  And then they zoomed off!

Students ran down the straightaway, leaving the track to start a long loop around the softball and soccer fields before returning to the track and the finish line.

After their run, the kids were treated to short talks and a Q&A session with two hometown NBA G-League players. The G League is the NBA’s official minor league basketball organization. 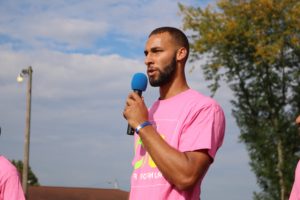 Erie Bayhawks forward Taren Sullivan gave the kids this advice.  He said, “Life will throw you challenges, and sometimes it will be hard, but you get to choose how you handle life’s challenges. So when you wake up in the morning choose to have a good attitude.  It will make handling life’s challenges easier.” 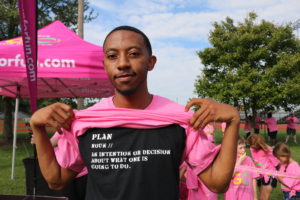 Three-point record holder Martyce Kimbrough wore a t-shirt with his life motto on it.  Martyce told the kids “Stick to the Plan.” He encouraged them to make a plan and work to realize it.

Thanks so much to INEOS Nitriles and Shawnee-Lima schools for hosting us.  And thanks to our special guest athletes.  We hope to see you again next year!